Today on Shelf Road in Fremont Co., Sam Peck, a veteran Blackhawk helicopter pilot and one of the Nature Place Staff, brought me the most amazing insect I’ve seen in years. Mystified at what it might be, I posted it on Arthropods Colorado Facebook group. Within an hour or two, I had about thirty comments, among which was an identification to genus and family: Alejandro Estrada identified it as a bot fly, genus Cuterebra, family Oestridae. Eric Eaton, entomology generalist who knows almost everything with six legs, further identified it as a rabbit bot, based in part on the red in the eyes. OMG. Then Prof. Boettner from UMass went still further, calling it Cuterebra lepusculi, and female based on the wide gap between the eyes. He verified that only the females have the red eye spots, and said that they fade with time in museum specimens. Unbelievable. They attack mainly cottontail rabbits. Other commenters noted how cute it is, but still others found this revolting, as bot flies are parasites that lay eggs under your skin, where the larvae hatch and cause an inflamed canker that eventually ruptures to allow the hideous (but cute) parasite to fly away. Although this particular specimen was not capable of flight, Prof Boettner assures me that once this thing sits for 24 hours or so, it will fly like its house is on fire, and will lay eggs in rabbit burrows.

Prof. Boettner’s last email on this subject states, “Hi Sam. Say hi to the Williams College gang for me. I should mention that although bots have short lives, females can lay over a thousand eggs in that short 10 day lifespan. And they only need one male and female egg to survive to keep the population stable. Amazing every rabbit isn’t infested. But they waste a lot laid in runways that never get in a host. That is a beauty that you found. One of the larger bots in the world. There is one in New Mexico that has yours beat in size. C. mirabilis. Nearly 2 inch long females! It uses black tailed jackrabbits as a host. And the male of that species has never been seen. So lots of mystery in the bot world.” He is doing DNA studies, and expressed the hope that I might have taken the specimen. Darn. So, maybe Sam Peck will go back up there and find me another one.

Some viewers thought it might be a sculpture, a model. But it’s the real thing. After that, this moth larva seemed almost pedestrian. 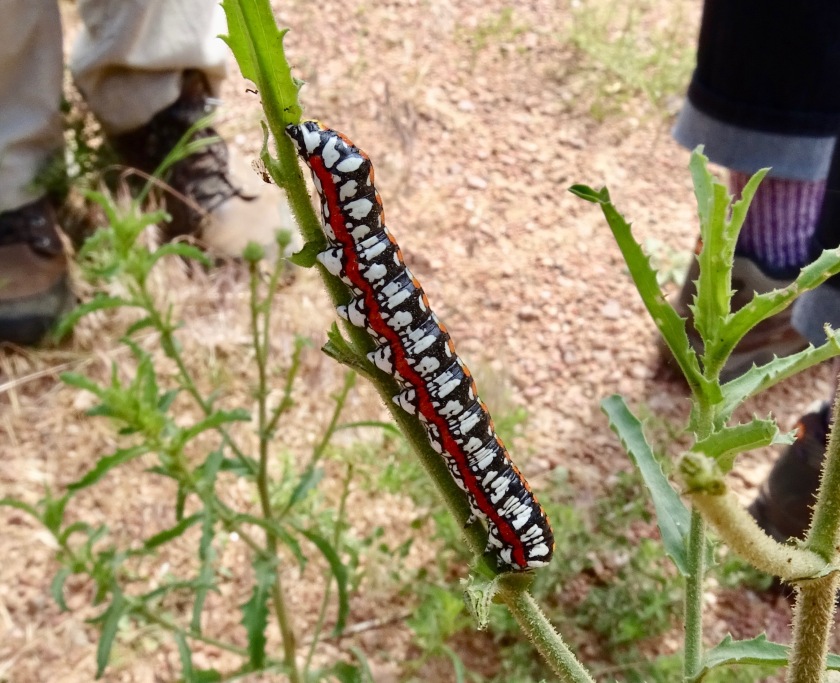