Introduction and site description:     Butterfly surveys have been used around the world for several decades to determine the ecological health of habitats and to document or measure changes over time. In El Paso County, since F. Martin Brown began his first forays into the hills to document butterfly ranges in the 1930’s, the human population has grown from about 33,000 to over 587,000. In the same time interval, the land area of Colorado Springs proper has increased from about 12 square miles to nearly 300 square miles, and the current human population density of Colorado Springs is about 2027/square mile, and that of El Paso County about 276/sq. mi. (http://www.citydata.com/county/El_Paso_ County-CO.html; U. S. Census Bureau 2000 Report). Although the habitat loss concomitant with development caused many local population extinctions, especially as wetlands were disturbed, the city of Colorado Springs today is bordered by abundant preserved public lands, and it is probable that most butterfly populations in the areas around the city are little changed in the wake of this extensive development. Strongly restricted species, however, may now have fewer refugia and may occur in depressed populations. Regional extinctions may have gone undetected.

In the late 1980’s, while doing volunteer work for prairie restoration projects in Illinois, I learned that a country doctor’s botanical notes, written a hundred years earlier as he travelled from farm to farm, provided the basis for understanding the floral community of the tall-grass prairie before its wholesale destruction was realized. Many times in my life as a butterfly and moth enthusiast I have wished that some naturalist a hundred years ago had documented butterfly occurrences and abundances to which my modern observations could be compared. Although F. M. Brown’s famous 1956 Colorado Butterflies contained collection records for each species treated, along with anecdotal notes, there were no useful statistics on population densities in this region. And due to the vast numbers of data points, subsequent publications on Colorado butterflies (Ferris and Brown 1981; Fisher 2005 and following) have plotted distributions by county and have not included statistics.

It appears likely that the future of the Pikes Peak Region may involve a great deal more change, perhaps in increased settlement and development, or perhaps in climate shifts due to global climate change. An extended drought may produce significant changes in the insect fauna of the region. In any case, it seems that a present survey may provide future entomologists with data that can be used to compare butterfly populations a hundred years or more in the future.

In the summer of 1991 I began a long series of hikes into Bear Creek Canyon, on the southwest edge of Colorado Springs, for the sole purpose of counting butterflies. I have continued this until the present time (2017).

Bear Creek is a permanent stream that descends with little disturbance from the southeast face of Pikes Peak and Almagre Mountain through the foothills and parts of Skyway, a suburb that encroaches westward into the transition zone forests until the slopes are too steep to allow building. Most of Bear Creek Canyon has been public land throughout the history of this city, except that in the early days of settlement a very few homesteads dotted the stream sides as immigrants sought gold or grazing land. Most of these homesteads were soon abandoned. Jones Park is one such homestead.

Below the study site proper, Bear Creek Nature Center occupies several hundred acres that abut developed commercial property on 8th Street. No counts were made in this portion of the park, as carrying a net implies use that is not authorized.

The poorly maintained road in the Canyon, which is called “the lower end of the High Drive,” is one-way for motor vehicles from the top down, and is open from the first of May through October unless washed out by flash floods. This road crosses the divide between North Cheyenne Canyon and Bear Creek. It sees heavy foot traffic at times because it forms part of a hiking loop on Section 16, which is also public land. The route walked for butterfly counts is the first 1.74 km (1.09 mi.) of the road, beginning at the caretaker’s house [38° 49.20’N / 104° 53.56’W, 2024M elev.], where Bear Creek flows through a weir for water measurement, and at the upper end includes a 150-meter portion of the Specimen Rock Trail (to the first foot bridge) [38° 48.54’N / 104° 54.36’W, 2182M elev.]. The parking lot at the caretaker’s house is located at the intersection of Gold Camp Road and Bear Creek Road.

Methods:     Because the lower canyon is narrow and the walls precipitous in places, the road is the logical “transect” on which counts can be made. From the beginning, an emphasis was placed on counting every butterfly that could be found in the canyon. Thus, a narrow transect design was inappropriate. Wandering from side to side of the road and briefly exploring wider roadside areas made more sense than making a strict transect count on a 5-meter-wide corridor. The average walking pace was approximately 29 meters per minute, but butterfly-poor areas, where the road forms a shelf with cliffs on one side and a steep scree slope on the other, were walked through much more quickly; highly productive areas, where the slopes are more gentle and the flora more diverse, were walked in starts and stops to net or photograph difficult species. Butterflies were counted at any distance within which they could be identified. Specimens were identified in the net when necessary and possible, and binoculars and a telescopic camera were used to examine wet spots, flowers, and perches. Difficult, look-alike species were lumped (eg., “Erynnis sp.” or “Speyeria sp.”) when time or skill did not permit determination, and these records are not included. Thus, numbers are the most accurate for the most easily identified species, and most conservative for the most difficult groups. Names follow the second edition list made by the North American Butterfly Association, except where updated by Fisher’s 2004-2009 fascicles. Vouchers are in the collection of the author.

Hikes were taken within the hours from 0900 to 1630h, under clear to slightly cloudy skies (never with overcast conditions), in temperatures ranging from 17° to 35°C, and with no more than light winds. This study includes a total of 81 survey hikes totaling 135 hours between 5 March and 30 August. March, April, and August data are recorded as monthly numbers, but during May, June, and July, data are given in two-week intervals because the composition of the in-flight butterfly community changes quickly during the mid-summer months (fig. 1).

Results:     One hundred thirty-five species of butterflies have been identified in the immediate vicinity of the study, but of these, only 105 were found at the site per se during the hikes involved. The temporal distribution of these species is shown in Figure 1. Raw data are shown in Table 1 along with calculated values of number per hour of observation time and minutes between sightings. In that table, butterfly species are arranged from the most abundant to the least.

During the month of March, the only butterflies recorded were adult hibernators. In April, 22 spring emergent species appeared, but adult hibernators were still in greater numbers than any emergent species. Only six species were found to be common, that is, in numbers greater than one per hour. The peak of butterfly activity was in early July, when 72 species were on the wing. The most common butterfly in the canyon was Celastrina lucia, which was encountered from April through early July, and again in August. This species is far and away the most common butterfly from early May through the first half of June. It drops to the fifth most common in the second half of June.

Table 1. Butterflies found during each time interval, recorded as total number (N), number per observation hour (N/h) and the average number of minutes between sightings of each species (min. between sightings). Species are sorted from most abundant to least. 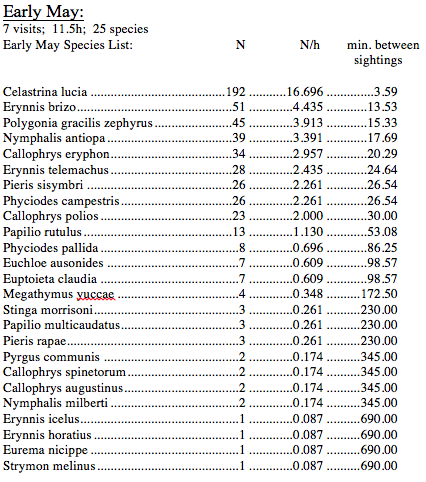 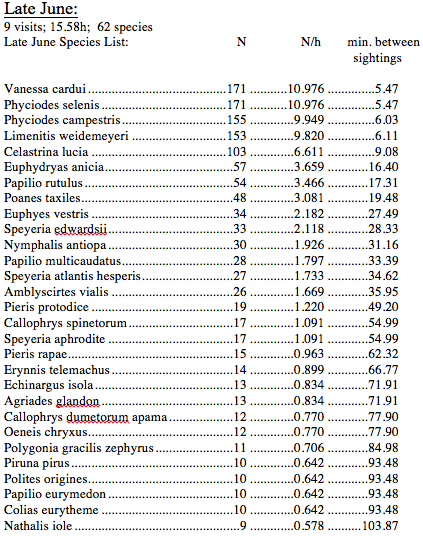 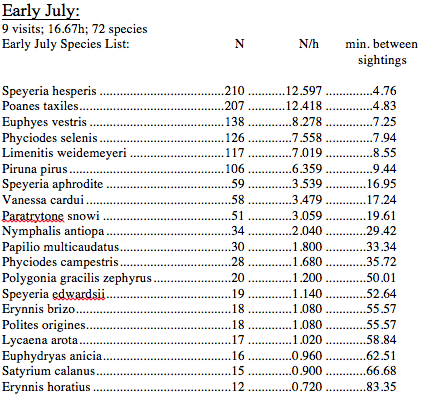 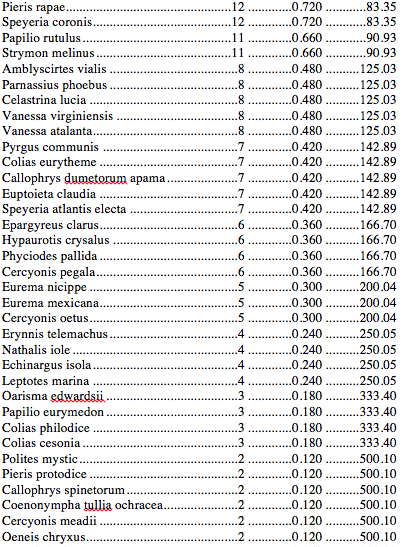 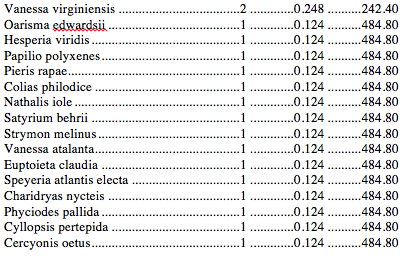