My goodness, I’ve been going back through my old data sets from the 2006 and 2007 season when we studied the effects of forest thinning on many aspects of the ecology, including the invertebrates, which, to me, suggests moths. Look at these graphs, for example. Each of them considers a single group, or genus, of moths as they respond to thinning across the years. The leftmost points are from the control stand–never thinned. The next point, moving right, is a collection made from a stand thinned the previous year. The highest points are collections made four years after the thinning. And the last point, way off to the right, is a collection made sixteen years after thinning. Look at the pattern. 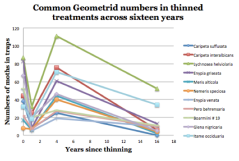 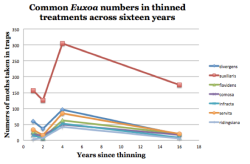 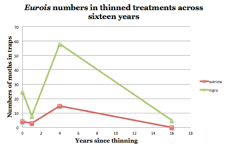 Can you see the trend in all of these groups? The upshot is that they all show reduced numbers after one year of thinning, then they all show increasing numbers after four years. Then, by sixteen years after thinning, the numbers fall to near the original set. The bottom graph shows the overall biodiversity of ALL moths in this study. But the wonder of wonders is that, while the biodiversity is about the same after sixteen years, the community has greatly changed. That is, many of the original species are gone, but have been replaced by a new set. So biodiversity is not affected, but the community structure is very, very different. All this to be published in the next year. One of my 2017 goals. Questions? Ask.